Learn about warts and how Knoxville Institute of Dermatology can help you.

Warts can be one of the most persistent and frustrating skin conditions. Our providers at Knoxville Institute of Dermatology are trained to identify and treat many different types of warts with a variety of treatment options. The customized treatment plan will depend on the age of the patient and the type of wart. The best way to keep warts from spreading is by treating them quickly to avoid shedding of the virus into nearby skin. Contact our office for an appointment today if you have warts that are multiplying, painful or troublesome.

What are viral warts?

Warts are very common non-cancerous growths of the skin caused by infection with human papillomavirus (HPV), a DNA virus. More than 100 HPV subtypes are known, giving rise to a variety of presentations. Skin infection occurs in the superficial layers of the epidermis, causing proliferation of the keratinocytes (skin cells) and hyperkeratosis.

HPV types 2, 3, 4, 27, 29, and 57 are the most common subtypes of HPV in warts. A viral wart on the sole of the foot is also called a verruca, and warty lesions are often described as verrucous.

Who gets viral warts?

Warts are particularly common in:

HPV is spread by direct skin-to-skin contact or autoinoculation. This means if a wart is scratched or picked, the viral particles may be spread to another area of skin. The incubation period can be as long as twelve months.

What are the clinical features of viral warts?

Warts have a hard surface. A tiny black dot may be observed in the middle of each scaly spot, due to a thrombosed capillary blood vessel.

Common warts present as papules with a rough, hyperkeratotic surface ranging in size from 1 mm to larger than 1 cm. They arise most often on the backs of fingers or toes, around the nails—where they can distort nail growth—and on the knees. Sometimes they resemble a cauliflower; these are known as butcher’s warts.

Plantar warts (verrucas) include tender inwardly growing and painful ‘myrmecia’ on the sole of the foot, and clusters of less painful mosaic warts. Plantar epidermoid cysts are associated with warts.

Plane warts have a flat surface. The most common sites are the face, hands and shins. They are often numerous. They may be inoculated by shaving or scratching, so that they appear in a linear distribution (pseudo-Koebner response). Plane warts are mostly caused by HPV types 3 and 10.

Filiform warts are on a long stalk like a thread. They commonly appear on the face. They are also described as digitate (like a finger).

Oral warts can affect the lips and even inside the cheeks, where they may be called squamous cell papillomas.

What are complications of viral warts?

How are viral warts diagnosed?

Tests are rarely needed to diagnosis viral warts, as they are so common and have a characteristic appearance. Pinpoint dots (clotted capillaries) are revealed when the top of the wart is removed. Dermatoscopic examination is sometimes helpful to distinguish viral warts from other verrucous lesions such as seborrhoeic keratosis and skin cancer. Sometimes, viral warts are diagnosed on skin biopsy. The histopathological features of verruca vulgaris differ from that of plane warts.

What is the treatment for viral warts?

Many people don’t bother to treat viral warts because treatment can be more uncomfortable than the warts—they are hardly ever a serious problem. Warts that are very small and not troublesome can be left alone and in some cases they will regress on its own. However, warts may be painful, and they often look ugly so cause embarrassment. To get rid of them, we have to stimulate the body’s own immune system to attack the wart virus. Persistence with the treatment and patience is essential!

Topical treatment includes wart paints containing salicylic acid or similar compounds, which work by removing the dead surface skin cells. The paint is normally applied once daily. Treatment with wart paint usually makes the wart smaller and less uncomfortable; 70% of warts resolve within twelve weeks of daily applications. If the wart paint makes the skin sore, stop treatment until the discomfort has settled, then recommence as above. Take care to keep the chemical off normal skin.

Cryotherapy is normally repeated at one to two–week intervals. It is uncomfortable and may result in blistering for several day or weeks. Success is in the order of 70% after 3-4 months of regular freezing. A hard freeze using liquid nitrogen might cause a permanent white mark or scar. It can also cause temporary numbness.

Electrosurgery (curettage and cautery) is used for large and resistant warts. Under local anesthetic, the growth is pared away and the base burned. The wound heals in two weeks or longer; even then 20% of warts can be expected to recur within a few months. This treatment leaves a permanent scar.

How can viral warts be prevented?

HPV vaccines are available to prevent anogenital warts. Anecdotally, these have been reported to result in clearance of non-genital warts in some people.

What is the outlook for viral warts?

No treatment is universally effective at eradicating viral warts. In children, even without treatment, 50% of warts disappear within 6 months, and 90% are gone in 2 years. They are more persistent in adults but they clear up eventually. They are likely to recur in patients that are immune suppressed, eg, organ transplant recipients. Recurrence is more frequent in tobacco smokers. 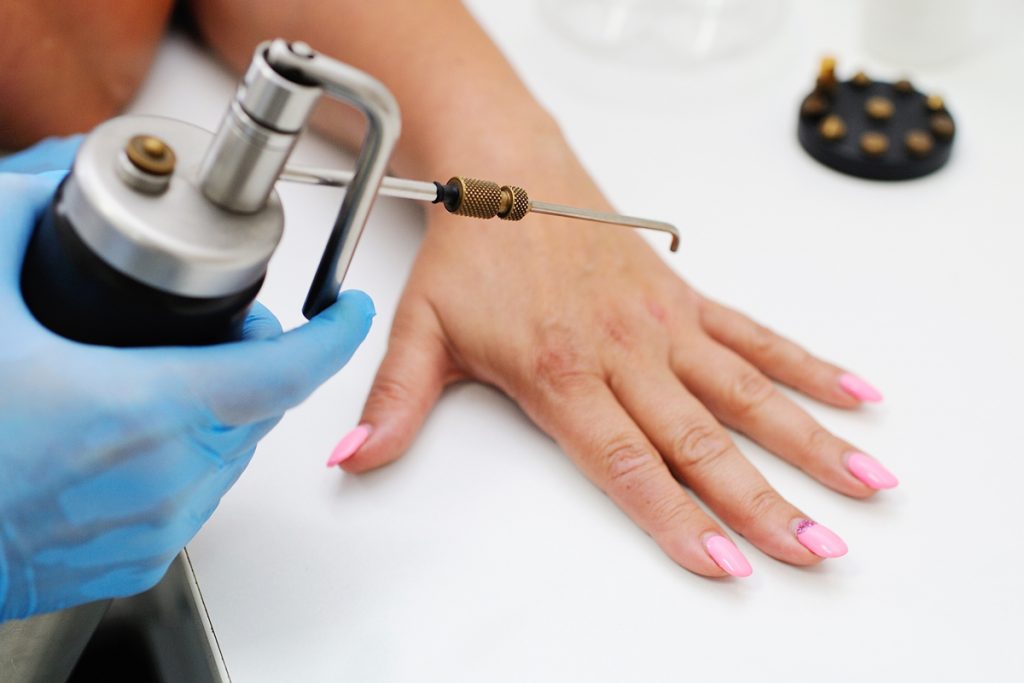 Contact Knoxville Institute of Dermatology today and let us help you find the right treatment for your warts.